Are Food Marketing Strategies Keeping Us Unhealthy? | UpMeals
← Back to blog Think back to the last food commercial you saw. Was it a colourful shot of a fruit bowl or a hearty salad? Were they promoting your local farmer’s market for fresh vegetables or encouraging you to buy some organic eggs? Most likely not. Chances are you’re more familiar with commercials selling processed products like cereals, candy bars, combo deals at fast-food chains, or soft drinks. In fact, if we asked you for the McDonald’s slogan you could probably hum the tune in your head, and you can likely name at least a few children’s cereal mascots. Tony the Tiger and Captain Crunch are sure to inspire a nostalgic feeling for many out there. Therein lies the enormous power of food marketing.

Food marketing efforts have been some of the most effective business and sales tactics out there. Companies like Coca-Cola, McDonald’s, Burger King, and Nestle have spent (and earned) hundreds of millions of dollars on their marketing and visibility strategies.

The fact that we can all recall these brands and names with such ease speaks greatly about their marketing efforts. The success of these efforts however, has come with a high price for public health.

The rise of childhood obesity, early-onset diabetes, and chronic diseases is linked to our eating habits, and a lot of our eating habits are linked to what we’re exposed to (in a large part by media and communications). The truth is, the way food is being marketed may be causing more harm than good, and the food industry doesn’t have our health as a priority.

The Power of Food Marketing

Food, unlike most other products in the market, is a daily necessity for every human being. The demand for food, therefore, is stable. Even in economic hardship food ecosystems are some of the last industries to see the effect of recessions. So it’s no surprise that food products are some of the most successfully marketed items.

The Canada Food Guide stated that food marketing has a list of objectives including creating food trends, influencing food choices, generating brand loyalty, and encouraging consumption by means of rewards, promotions, and loyalty points.1 Needless to say, these consumer behaviours are all target to one simple benefit: Generating sales and profit.

Take McDonald’s as an example. The link between advertising and purchase decisions was measured in a 6.5 year study of 180,000 customers. The results showed that nearly half of the sales growth could be attributed to marketing efforts.2 With such significant results, it’s no wonder companies spend billions of dollars improving their marketing tactics.

Why target children as consumers?

The food industry in particular highly benefits from targeting a significant demographic: children.

When thinking of a TV food commercial you’ve encountered lately, you most likely will recall an item generally thought of as a product for children, be that a colourful breakfast cereal or a happy meal combo. Children and youth are exposed to growing amounts of TV advertising regarding food and most of the food items advertised are snacks, candies, fast-food meals, desserts, and other items high in calories, added sugars, sodium, and saturated fats.3

But why are companies so invested in creating products specifically to allure children and targeting young generations in their advertising?

McGinnis et al. in their book “Food Marketing to Children and Youth: Threat or Opportunity?” state that children have a natural preference for sweet, salty, and calorie-rich foods because their bodies want to support their quick development stages. In addition, introducing children to new foods is significantly more challenging. It can take anywhere from 5 to 10 attempts to get a child to receive and accept a new food.4

This combination of children being picky eaters and their love for calorie-dense foods makes them the perfect tool by which to reach their parents. Parents after all, just want to satisfy their children’s picky palates.

The cycle doesn’t stop there however. As we grow into adulthood, our eating habits are informed by the habits we had growing up and the foods we were exposed to. So from a business perspective, marketing palatable foods to children is a long-term investment that maximizes their customer lifetime value.

The health cost of food marketing

There is a clear link between screen time and obesity, especially in children. To a large extent this is due to the subsequent lack of physical activity. But researchers at the IOM (Institute of Medicine) have wondered whether exposure to more digital means of advertisement for unhealthy foods is also a factor that plays a role in the relationship between screen time and BMI.

In a research review conducted by the IOM where they analyzed over 120 research publications, they found a strong association between children’s food consumption, and exposure to food advertisements. In looking at the research analyzed they stated that they also found a link between advertisement exposure and body weight.5

Another review following the Québec ban on TV advertisements aimed at children showed that the ban lowered fast food consumption and amount of children cereals in ad-banned households as compared to homes that were exposed to traditional advertising through American TV networks.3

The effects of food visibility

The effects of media marketing are great to create awareness of brands and products. But, marketers and sales specialists know this is only part of the battle in getting customers to pay up. In order for consumers to actually buy advertised products, they have to be easily accessible and visible at the point of purchase.

Eye-tracking studies have shown that foods placed at eye level and top shelves are more likely to be purchased.3 In fact, if you imagine your local grocery store you’ll recall such product placement techniques: Candy isles generally place “kid friendly” treats at the average child eye level. Moreover, candy bars, snacks, and sugary drinks are usually displayed at the checkout counter as the perfect opportunity for last minute temptation.

The same applies to restaurants and other food providers. The placement and highlighting of items on a menu can greatly inform a customer’s choice.

Clearly these marketing tools are effective in generating sales, creating brand loyalty, and ultimately increasing profit. But in many cases they are doing little good for our general health. Ultimately, consumers need accurate and available information to make healthy choices. However, the financial interests of companies make navigating this area challenging. Many restaurants fight requests to add nutritional values to their menus, while marketers disguise unhealthy food characteristics under ambiguous labels like “energy packed” or “fat-free”.

It is no wonder that the lines here get blurry for consumers. With so much push from marketing efforts and so much misinformation, unknowing consumers are left with little resources to make informed choices.

Efforts like the Quebec food advertising ban mentioned above have taken place in many countries to reduce children’s exposure to unhealthy food advertising. However, these efforts are challenging and often met with great pushback from the product companies.

Many advertising restrictions are aggressively fought in the court of law under arguments that they defy free markets and protected speech rights. The Massachusetts attempt to restrict tobacco advertising near schools and playgrounds is a clear example of this. The initiative was dismantled by the supreme court in 2001 under the argument that this restriction violates free speech rights.6

However, various efforts have been implemented to reduce children and youth exposure to unhealthy food commercials. The UK for example has regulations in place that prohibit unhealthy food television advertisements to run during child-oriented programs.6

Can these food marketing tools help us eat healthier?

Using some of the marketing efforts discussed above, and repurposing them to encourage healthier choices can help shift consumer behaviour  to create a more sustainable and healthful lifestyle.

These marketing strategies can support customers with the ease of decision making. Studies have shown that strategic placement of healthier meal options in fast food restaurant menus has increased their sales. Similarly, with the objective of making healthy choices easier, simple health claims clearly defined on packaging or menus have a stronger effect than traditional labeling.

When it comes to the physical placement of food options in grocery stores, cafeterias, and vending machines, placing healthier foods at eye-level, can increase their consumption. Especially in schools or workplaces where people are rushing and tend to go for quick and easy decisions.

Food awareness is a critical aspect of our food environment, and efforts should be made to support public health concerns. Whether by use of labeling, advertising, or product placement, marketers should all be taking steps to educate consumers and enable them to make informed choices. 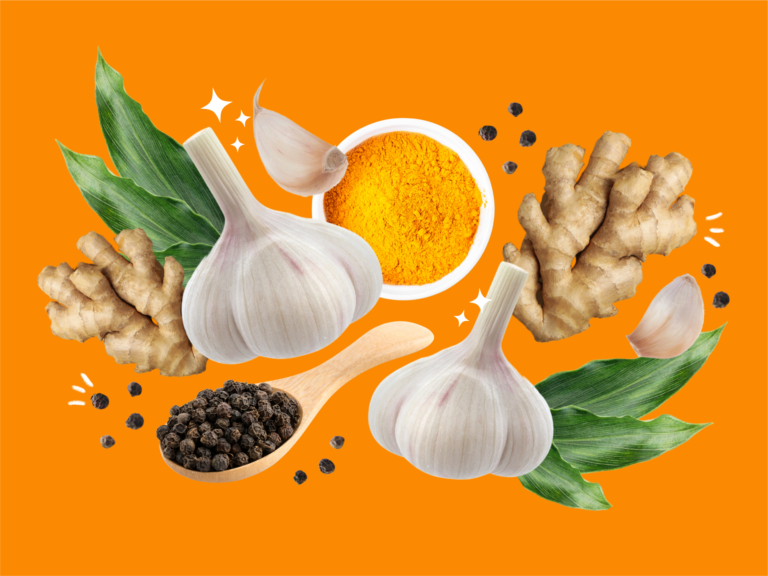 These ingredients can give you a valuable immunity boost, and you most likely already have them laying around in your kitchen. Tech & Wellness in Times of COVID-19

Because we love everything tech and wellness we wanted to give you a little snippet of what this new era has brought into the wellness world. Most chronic illnesses are linked to widespread inflammation in the body. Luckily, reducing chronic inflammation can be safely done through diet.